I hate wasting paper. Every notebook that I haven’t used up to its intended purpose, I fill with other things. So did Frank Parker. The archives have his teaching notes that bear the date 1908-1910.

But instead of silly doodles and hare-brained schemes, Frank filled the remaining pages of his notes with a mini-chronicle of the life of his Marjon classmates. He became a president of a chapter of the alumni club. Here Frank goes rogue and his neatly organized lessons give way to the more personal scribbles of the chronicle. Bring out the magnifier! 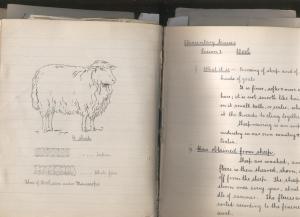 He suffers for science! The unhappy sheep drawn by Frank for his teaching notes

The part that contains teacher’s notes is beautifully caligraphed and is easy to read. The presentations are often decorated with illustrations. I’ve always marvelled at apparent skill of Majon students, who were putting beautiful sketches into each other scrapbooks. It is easy to forget, that they actually were taught to draw. Frank shows a steady hand with his sketches of scientific equipment, human anatomy and, in one case, with a picture of a very unhappy sheep.

The chronicle part might look messy, but it is well organized. Each of Frank’s friends has at least a page dedicated to him. There are current addresses and nicknames, as well as major events in the life of his buddies. But apart from the usual marriages, births and deaths one can see some more unusual entries. This way we know that his friend nicknamed ‘Hector’ fell off the moped in the fifties.:-) I wish I could ask Frank what happened to his friend Bolly and why the ‘phone call ‘troubles my conscience’’. I smell a mystery.:-)

The notes also contain newspaper clippings, calling cards, letters and everything that had even a remote connection to people of Marjon. The chronicles go well into sixties, so Frank collected everything for fifty years, showing how important to him was his time in Marjon. Back then ‘mass communication’ meant that you had to type one letter over and over, to get a copy to everybody. I can only imagine how much effort it took to keep the old friends together.

The plate from St John’s College

Our archive is not a typical epresentative of its kind. In a way there is a lot of museum thrown in. I dare you to show me another archive that keeps a plate in its collection. And it’s not like ti is an ornamental or commemorative plate. Just a regular plate from the kitchen of St John College, it even has a tiny Lamb stamped on it.

Another funny item is a rather large tobacco jar. It is a ‘communal jar’, that was donated by a wife of one Eric Pye. Eric was a Marjon

student in the years 1947 to 49. Many of the men in the school were ex-service men and smoked like a bunch of industrial chimneys. The jar was a kind of ‘comfort item’ for those men that were away from home. Eric’s wife writes in her letter that the pipe or cigarette was an indispensable help in ‘solving mathematical problems’. Paradoxically, smoking inside buildings was not permitted and the smokers were relegated outside if they wanted to enjoy the tobacco from the jar.

An interesting feature of the jar is its brass locking mechanism. It is kind of tri-pronged seal with a heavy screw atop it. It took me a while to discover, that the screw does nothing and the seal has to be slid from under the rim to be disengaged.

This jar is one of those little thingies that the past sometimes leaves for us. It doesn’t say much in the way of historical facts, but a lot about the historical character.

Sometimes the archives offer significant discoveries, such as lost poems of a well-known author or information about somebody who was first at something. But sometimes the discoveries can be quite small and seemingly insignificant, but that doesn’t mean that they are worthless. On contrary they might be the ones that bring the most joy.

I’m sure you’re familiar with the concept of exlibris or bookplate. Those are small labels, prints or stamps that are sometimes put inside a book to mark them as somebody’s property. Some of them can be quite elaborate and beautiful. Many libraries used to have their exlibri and the library of Marjon had one too. After the merger of the two colleges a new bookplate was designed to replace the respective exlibri of the two colleges. There were at least two designs, but both included the lion and the lamb of the Evangelists. Here is one that is the most common in the books of the archive collection. 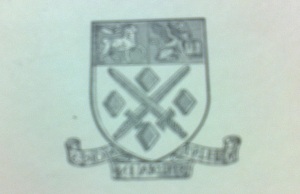 But one of the books had escaped the change of the bookplates. It is a dictionary of the Middle-English and it boasts this beautiful, pre-merger bookplate:

A small thing, but made my day.

There is this book that I found in the depths of the archives. It is quite interesting, as it was written after the school has been in existence for 45 years and it was collaborated upon by people who were closely involved with it, sometimes both as students and teachers. But to me, the most interesting were the memories of Derwent Coleridge, the founder of St Mark. He talks about the way the whole area was when they first arrived. He says that it was ‘market-gardens and meadows intersected by creeks and ditches covered with green water weeds.’ It is really hard for me to imagine the middle of London to ever been like that. But the invasive expansion of London was apparent even back then, as he says: ‘it was country already condemned to turn into suburb…’

He recollects everything about the college itself: the grounds, the buildings, the teachers and pupils. Even Mrs Harvey, who was the matron in charge of the domestic servants. It made me think that she must have been an incredible figure. Colerige says that once, hearing rumours of burglars on the grounds, even that she was ‘…elderly and rheumatic, (she) went around the passages with a poker.’

He also casually reminisces about the music evening that they had, when he listened to Sir Arthur Sullivan singing. Yeah, Derwent my man, I’m not jealous of that at all:-) I swear sometimes it feels like we had our fingers in ALL the pies at some point.

But the memories of others as they remembered St Mark and Coleridge were as interesting. Especially what A.C King said, that he was ’…delighted in taking every opportunity of introducing his assistant masters to any man of note…’ He must have been proud of them and it looks to me like he did everything to help their careers and the school’s reputation.

I wonder what Coleridge would say if he could see us now? I bet he would be proud of us getting full university title last year. I think he would be happy with what his legacy had become. As for me, I enjoyed the book and I will definitely come back to Coleridge because there is more to say about him.