Tolstoy and his secret

Tolstoy is the writer that I have a complicated relationship with. On the one hand I can’t deny his importance and influence; his books survived the test of time and are still being read after all that time. On the other hand, he was the only man that put me to sleep with his book (okay, that sounded better in my head:-).

In 1861, Tolstoy came to visit Marjon. This visit went almost completely forgotten and undocumented. At that time he was still completely unknown, so we could assumed that for the teachers and students of Marjon he was just another random visitor, a foreigner at that, wishing to see the college and the Practising School attached. Ten years later and we would have a couple accounts and maybe even a photo from the day the famous Russian writer came around. But that was before he gained his fame. At the time, Tolstoy was on a mission to reform education in Russia and, like Shuttleworth, he went around the Europe visiting schools to see how things can be (or should not be) done.

There is one thing I still don’t understand. Apparently, at each school he visited he would request pupils to write short essay for him. You can read the essays the students of the Practising School wrote for him in the book ‘Tolstoy in London’ by Victor Lucas. The essays are full of the simplicity of a young boys’ life- who hit who and who won at marbles. But for some reason Tolstoy needed those as he would collect and take them away with him. Why would he need those? What would he use the essays for? Wouldn’t be more useful to him to make notes and grill the teachers about their methods? This is the Tolstoy secret. If you dear reader, see a method to this madness, please tell me. I really would like to know.

Them Elizabethans, courtesy of Michael Roberts.

Okay everybody, time to ‘fess up. What do you know about Elizabethan literature? Discounting Shakespeare’s and various other drama writers’ works. Poetry- sonnets, Petrarchan vs. anti-Petrarchan, but what else? *crickets chirping* Okay, I might play smart, but I knew nothing either and it would stay that way if not for my pal Michael Roberts, that I’ve written about before. His book ‘Elizabethan Prose’, a book that he wrote, is kept in our collection. Published when monocles reigned supreme, ie. 1933, it is a collection of examples of the prose of the Elizabethan prose.
And those guys wrote wide and wrote well. In the book there is a collection of funny stories, weird stories, bawdy stories. There are beauty tips and treatises. You can get a recipe for a quince marmalade or advice on healthy living. The Elizabethans will help you make mince pies and then help you lose weight you gained eating them. In short, there is a wide selection of fiction and non-fiction that touches many aspects of life. And with books like that, the past seems a little bit less like a foreign country. Sure, they do things differently there, but they enjoy a dirty joke, sweet food and a good drink as much as you do.
And because I love me some spiced wine, here is the recipe for Ipocras taken from the Roberts’ book.

Take a gallon of wine, an ounce of Sinamon, two ounces of ginger, one pound of sugar, twentie cloues bruised and twentie corners of pepper big beaten, let all these soake together one night and then let it run through a bag, and it will be good Ipocras.’

Stephen Southwold, aka Neil Bell-one of our alumni that made career of being a novelist. But this one is special to me and it will soon be clear to you why.

He had no stomach for the Marjon as it was in 1905-1907. The stern discipline and the monastic isolation was hard on him and who can blame a creative soul to rebel against that? Yet he apparently did pretty well, especially in French.

He is one of those writers that were quite prolific in their time, but now fell into obscurity. And I don’t mean one that can be bought 10p a dozen. I am talking worldofrarebooks.com obscure with ebay only having his collection of stories circulating among hardened bibliophiles. And it is a shame, as he was writing a lot and in variety of genres, including fantasy, speculative- and science-fiction, all at the time where these genres were just being developed. It would be good to see his name next to Gernsback, Campbell, Zamyatin and Čapek. And I’m stopping right there before you’d get a lecture on the history of SF that you never asked for.:-)

What we have of him, next to one of his (now rare) books, are the letters he wrote to one of his friends. There is something very personal about letters, even when they are not addressed to you. It feels like this man, dead for so many years, still speaks to you somehow.

He writes a lot about his creative process and the issues around the world of publishing of his time.How he tried to gather material for a war book, but only rumours so he can write a speculative account of a war that did not happen yet. He writes about troubles with his publisher, saying that he was the only person that didn’t like his new book and how the epistolary novel fell out of favour yet again. Or how he seems to have a quirky fondness for the name ‘Esteban’ naming thus another of his characters. I wish I had read his letters when I was still a creative writing student, plenty of good research material there.

So Stephen, Mr Sci-Fi Writer from the past, do you have anything else to say to your colleague from the present?

The Portrait of A Kitchen Maid 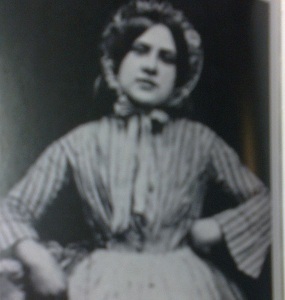 Remember the kitchen maid? The one that went to Australia? The minutes of the St.Mark College have preserved her memory, but what of the maid herself. Who was she and what kind of person was she? The lack of details prevents us from getting anything concrete about her, but we can at least make some educated guesses. I present to you, the portrait of the kitchen maid of the college of St. Mark:
The record says that her service was long and faithful. She probably started young, maybe about fifteen. A long service might imply anything from five to ten years. She was about to receive books worth one pound, and that would be a little less than a month’s wages- a substantial amount. That’s not something you give a person that was with you for about five years. Let’s say she is about twenty five then, been with the College for a long time, maybe even since it was opened. A hard life filled with never-ending work, but the gift suggests that she was treated well.

She is going to Australia, but why? Was her husband sent ‘down under’ and she followed him there? But it is a bit late and the large transportations already ended. Except for Western Australia, you could be sent there as a convict as late as 1868. Or was it something else? Gold rush maybe, 1851 was the year they officially found gold in Australia. Were they going to find their fortune in a place where there would be no social standards to bind them to life in servitude? Whichever it was, I’d say she was a person of a substantial courage.

The board decided to gift her books. Books, not a bible. Our kitchen maid was most definitely literate. This is not the usual picture when we think about the servant class in the Victorian England, but the truth is that the literacy levels were growing at that time, even among the lower classes. That is the time when the literature, especially novel, began to gain momentum. Before, it was common to listen to the novel being read. One literate person would gather their neighbours and read them the most popular novels. Now anyone could get skills to read for themselves, even a lowly kitchen maid. She must have some education then, and there were couple of places.

There was the Jews’ Free School, opened in London in 1817. ‘It charged 1d a week to its pupils, but a child who could not produce his penny was never turned away’ (Picard, 2005). If her father was a Freemason, she might have attended The Freemasons’ Charity for Female Children, where she have learned the domestic tasks, but also to read and write. Finally, if she never learned to read and write as a child, she might go to Working Woman’s College in Queen Square, that was open for ‘teachers, shopgirls and even servant maids.’(Picard, 2005). There were of course other ways she might have gained her education, but one thing is almost certain. During her service in the college, she must have showed her interest in books and reading, hence the generous parting gift. Truly a woman after my own heart:-)

And there it is, a portrait of a person long dead, coming alive before you with the power of research. A young woman- courageous, loyal, hard-working and filled with curiosity about the world around her. Remember her-I will.
Quotes are from the book ‘Victorian London’ by Liza Picard

I am back finally. Life gets in the way of archives but the archives are always victorious in the end.:-)
I’ve probably said that before, as a creative writing student I didn’t have any contact with first hand historical sources. And in a way I am still blown away by the sources we have in the archives. I am talking notes and reports that are so old that you can’t say if they were written in a brown ink or it just faded to be that way. It is going page by page minutes of meetings that were held long before you were born. Or chasing the entries in the catalogue that turns out to be defunct. And being a person that is prone to making strange analogies, the archival research seems to me like digging for potatoes.
Sounds crazy I know, but imagine if you will the archives as a field. You know that the ‘potatoes’ are there- the things you want to know, you just need to dig them up. Sometimes you dig and dig and there is nothing. Just random information that you don’t need right now. But just as you are about to give up on this patch- there is a potato. Here is what I dug out recently, all concerning the library/books.

All those little potatoes might be used in the project about the history of our library. They may be transformed from loose information into something coherent. In other words, the potatoes are going into a salad.:-)
So next time you read historical book, know that you’re ‘eating potatoes‘ somebody had dug out for you.:-)