If there is one thing that I have learned since my arrival to the archives is that very often you can follow the reasoning of people from the past. You see who they were and what they did and why it was important to them. Take Kay-Shuttleworth. He was a doctor-> he saw what poverty did to people-> he didn’t like it-> he had an idea how to fix it. It’s logical. You can follow the process.
Not so with Fawnthorpe. Fawnthorpe was a student of St. John’s and later he became the principal of Whitelands College. This college was a school dedicated to training of female teachers. Hmm, a guy trained to teach boys is a head of school training girls. Well I suppose they couldn’t make a woman headmistress back then, the monocles in all the England would be in peril if they did. Ok, what else is Fawnthorpe known for? A little book called Household Science: readings in necessary knowledge for girls and young women. So the guy who trained women to be teachers also wanted them to be domestic goddesses?

But the oddest thing in all this is the Whitelands College May Queen Festival. It all started with Ruskin. Yes, THAT Ruskin. Among many great things that he was, Ruskin was weird. He held very bizarre view concerning feminine purity and innocence. I suspect that the world still suffers because of these ideas. Faunthorpe was Ruskins friend and admirer and following these strange perceptions, he

organized the May Queen Festival, where a girl would be crowned as a May Queen. It was a celebration consisting of pageants, dances, processions, fun and games. An enormous amount of preparations go into these. There were elaborate dresses made especially for the girls and each one would be presented a golden cross, to tie this festival’s pagan origins to the traditions of Christianity. This festival is celebrated to this day, even that since 1985 it is allowed to choose a King instead of a Queen. It all looks pretty and fun, a venerable tradition if I ever seen one. But I can’t help being weirded out by the roots of it all- one man’s inability to see women as they are and creating an elaborate ceremony based upon it. So, what was with you Faunthorpe? How did Ruskin roped you into it all?
So how do you interpret Fawnthorpe? An enlightened educator or a relic of outmoded thinking? A co-conspirator to other man fantasies or just a guy that wanted to use the occasion to do something nice for young women under his care? I admit that I don’t know.

Pictures are from Whitelands College May Queen Festival by Malcolm Cole 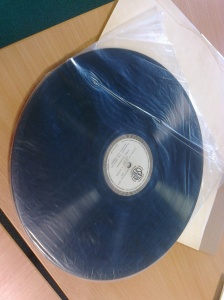 A private record made at Marjon

What would you donate to archives? Documents? Letters? Publications? Sure, that’s what we usually get. Unlkie other archives we also accept objects, like uniforms, badges, plaques. Stuff that is more likely to be found in museums. Also on ebay, if the original owner was famous, with a price tag to give Blill Gates a heart attack.:-)
Some things arrived that used to belong to John Atkinson, who was Marjon student in the years 1959-1962. And for the most part, those are typical things, a small tower of year books, a really long group photo, some copies of his letters. He wasn’t a celebrity, just a music teacher doing his best to inspire his students. His only chance at fame was shot down when BBC (which he used to fondly refer to as ‘Berlin Broadcasting Company’) wouldn’t put him on the box.
But there is one thing that is unique among his things. You open an envelope and there is this vinyl record inside. The label says: Ascension Day 1959, Sung Eucharist. A private recording of him singing. Not only were his words given to us, or the likeness in the old picture, but also his voice. Hey Mister Atkinson, aren’t you glad? ‘Non omnis moriar…’