Well, well, well. Seems like the old junk/fancy lamp from previous post is still in working condition, the lamp lits up and the lens is fine too. I actually got to see things that haven’t been touched since the advent of digital photography- slides, microfilmed documents and a commemorative reel made especially for the celebration of Marjons 150th birthday.

I even stumbled upon something of special interest to me, as a person interested in the history of microcomputers- a slideshow that was part of a presentation about role of computers in education. You know, the thing that was used before there was PowerPoint and those horrid gradient backgrounds.  Here are a few pictures, you can still see what’s what even that the backlight is messing with my phone big time. 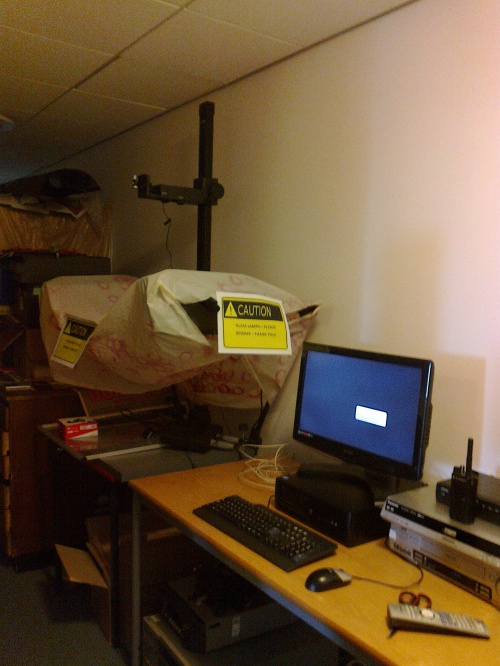 We finally have our digitization set up! Soon we will be able to digitize not only document, books and such but also transfer DVD and VHS to files. We’re certainly moving up:-)

There isn’t a better place to observe how the time flies than the archives. And the time flies especially fast for the computing history. For some reason we have some computing-related objects that for now can be labelled as severely outdated, but one day… 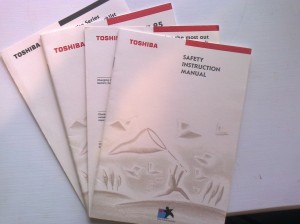 Four booklets for one laptop- all I got was two cd’s and a printout:-)

Among the things we have is a set of instruction booklets for a Toshiba laptop. We used to have a scheme that would give each and every student enrolled a laptop. I was the last class to benefit from this scheme and my laptop didn’t come with as much paper instructions. Not to mention that apparently the system that these laptops came with was Windows 95- dating the set more or less 25 years ago, an eon in the computing history.
And that’s nothing. We have instructions and certificates for Windows for Workgroups, which is so old it actually comes with a paper registration cards. That’s right, no internet for most computers in 1992. This stuff would come on a series of diskettes(no cd-roms then 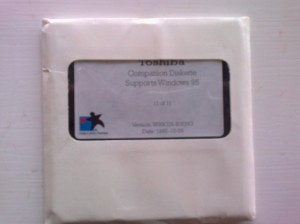 A diskette- soon to be put alongside Edison cylinders.

either) and behold: a sheet of printed labels that you’d have to put on them yourself.
Speaking of diskettes, we also have a companion diskette for Toshiba, still in an unsealed envelope- I can’t believe there are humans alive right now who have never seen one. I remember the time when buying a new box of diskettes was like buying a box of After Eight’s- open the seal on the box and each diskette came with a plastic envelope of its own.
Right now, these things are a bit(pun intended:)) of nerdy nostalgia. But one thing I know about nostalgia is that it can graduate to history when you have your back turned.