A Bagful of Stories: Mike Ford 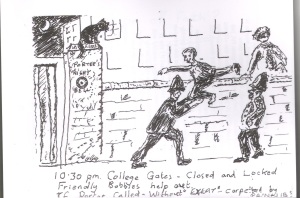 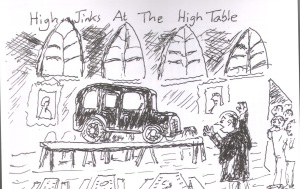 A car for breakfast- students’ prank at its finest.

A pirate collects charity into a chamber pot- you can’t make that up:-)

They say that everyone has at least one story to tell, but one guy has a bagful of them and he is willing to share. I have a pleasure of telling you about Mike Ford another great Marjon graduate.
We have three of his books in the archives, written and also illustrated by Mike himself. He also published them as he created a publishing house (Chwarae Teg Publications) just to tell his stories. Wow!
There is ‘Mike’s Odd Odes’; Reading this one can only be compared to reading Vogon poetry if Vogons illustrated their works- that makes the ‘Odes’ a mixture of bizarre and awesome, you can’t go wrong with that. ‘The 1930’s + 1940’s Revisited’ is a book of stories from his childhood in Penarth. A good read for anyone that prefers ‘common man history’ to the official history books.
But the one that is the most interesting for me was ‘A Stewed Ant in London, Paris and Cardiff (Ha! I didn’t get that one until I said it aloud.:-)’. Those are the mostly the stories from his time as a Marjon student 1955-57- the good, the bad and the weird. And those include: A pirate working for charity, a secret marriage and ‘bobbies’ helpful beyond their duties. My favourite though is the story about an especially strict teacher that finds a car on his table instead of expected breakfast. This one made me regret that I never witnessed anything like the pranks of old. On the other hand- today’s student has little authority to rebel against and I’m happier for it.
His work reminds me of Billy Hopkins and his books. I have written about him before. I think that Mike deserves as much recognition as Billy. Or maybe more than him, because he is hilarious and his anecdotes mademe laugh out loud (No, I’m not abbreviating that!;)